Alcoholic drinks are associated with important social functions in adult life. People toast with champagne at a wedding, meet business partners for scotch to celebrate a major deal or spend the day with friends traveling from winery to winery. Alcohol consumption is considered an accepted part of adulthood in the modern world. But for some people, one drink becomes multiple drinks, all consumed in one sitting. This form of alcohol consumption, known as binge drinking, can be incredibly dangerous.

People who drink alcohol may intrinsically know what a binge-drinking episode looks like. A person who is binge drinking is consuming a large amount of alcoholic beverages in a short period of time. As a result, the person becomes intoxicated with alcohol. Medical experts tend to use even more precise terms when they define an episode of binge drinking. For example, the Centers for Disease Control and Prevention (CDC) defines a binge as five drinks for a man and four drinks for a woman, all consumed in a short period of time.

A bar may closely regulate how much alcohol is served in one drink, but the average person drinking at home may have no idea what constitutes a “drink” by modern medical terms. The National Institute on Alcohol Abuse and Alcoholism (NIAAA) defines one drink as:

Using these definitions combined, a man who orders a shot of whiskey and a beer chaser, and then repeats that order twice more, would be on a binge. A woman who consumes an entire bottle of wine in one sitting might also be considered a binge drinker.

People who drink like this are not necessarily considered addicted to alcohol. People with these addictions, commonly known as “alcoholics,” have a variety of symptoms that binge drinkers may not share, including:

Signs of An Alcoholic

Alcoholics may also engage in binge drinking sessions, but they may also drink alcohol in order to simply function throughout each and every day. They may not even seem drunk to the average viewer. By contrast, people who binge drink may not drink every day of the week. In fact, they may go for days or even weeks without drinking at all. But when they do drink, they take in massive quantities and they do appear drunk. They may not have an addiction to alcohol, but they’re certainly not using alcohol in a safe manner. 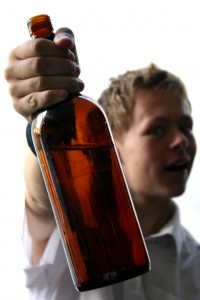 Alcohol can slow the mind, making it harder for the brain to make sound and reasonable decisions. In addition, alcohol can lower inhibitions, making it easier for people to say or do things that they would never consider when they were sober. As a result, taking in large amounts of alcohol can lead to a variety of violent and uninhibited behaviors. For example, according to a report published as a result of the National Survey on Drug Use and Health in 2009, teens who engaged in violent behaviors such as a fight at school or at work, were more likely to be binge drinkers than were teens who did not engage in violent behaviors. Their binge drinking impacted their ability to keep their emotions in check.

Similarly, alcohol can dull the reflexes and slow the body’s ability to act quickly and stay coordinated. People who binge drink can become incredibly uncoordinated, stumbling as they walk, and they can seriously fall and injure themselves as a result. Binge drinkers who choose to drive could suffer even more serious consequences, as they could kill themselves and others through their uncoordinated efforts behind the wheel.

Binge drinking has also been associated with unintended pregnancy. Inhibitions are lowered, making it easier for people to connect with one another, and they may be too impaired to remember to protect against pregnancy. If the woman chooses to carry the baby, and she engages in even more binge drinking during pregnancy, that child could be born with severe health problems due to alcohol exposure in the womb.

Binge drinking can also cause severe health problems. For example, the NIAAA reports that people who binge drink are 39 percent more likely to have a stroke than are people who do not binge drink. A study reported in the Lancet found that people who binge drink repeatedly are at higher risk for heart disease than are people who do not binge drink repeatedly. Some of the people used in this study died as a result of their heart disease. In addition, alcohol can cause damage to the liver, as it works hard to remove the alcohol from the person’s system after an episode of drinking. Repeated episodes of binge drinking can lead to severe liver damage.

The CDC reports that binge drinking can also have an economic impact, both on the drinker and others the drinker comes into contact with. In fact, the CDC reports that for each drink consumed, $1.90 is spent in damages. About 72 percent of these costs came from reductions in workplace productivity, but 11 percent stemmed directly from healthcare costs. Clearly, binge drinking can impact the economic health of the country, as well as the health of the drinker.

It can be difficult to know when to intervene in the case of a binge drinker. In fact, Americans have long been conditioned to believe that alcohol consumption is a private matter and that people who binge drink have a right to do so. Phrases such as, “cutting loose,” “on a spree” or “letting your hair down” are often used to cover up an episode of binge drinking. There are few hard-and-fast rules in place that can help families make this decision, but these actions might benefit an intervention:

Is it Time for Help

In a formal recovery program for alcoholism, a person learns to develop a completely new life that includes no alcohol whatsoever. According to the NIAAA, this approach isn’t always necessary for people who binge drink. Instead, binge drinkers may benefit from a short, targeted program designed to teach them more about how alcohol works in the body, and how alcohol use can be moderated to a safe level. They may meet with an addiction counselor three to four times, learning more and talking about the issue, although these programs can vary dramatically depending on the individual person. People who binge drink due to peer pressure might need one sort of program to help them practice resistance, while people who binge drink due to depression might need an entirely different program altogether. This is something the person and the therapist work on together.

Sometimes, patients enter these programs due to regular visits with their doctors. They may learn they have diabetes problems, for example, or their liver values may be askew on standard blood tests. These results allow doctors to bring up the issue of binge drinking, and patients may be receptive to getting help at the end of these conversations. Other people enter these programs because their families ask them to modify their drinking, and they realize that they don’t know how to accomplish that goal.

At Axis, we can help you learn more about why alcohol abuse is so dangerous, and we can help to clarify the difference between binge drinking and alcoholism for families who have additional questions and need more help. Please call us to find out more.